At the Citizens’ Grand Venue, we offer events that you can easily participate in, such as the Fuafua Dome and Kick Target. 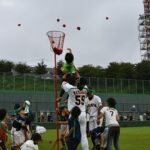 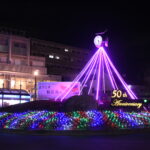